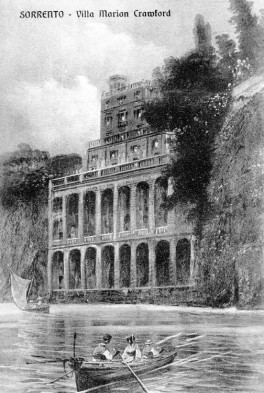 Along the Sorrento coast in front of the

The beach “La Marinella”, overlooking the sea, resting on huge ramparts that rise from the water, you can admire the beautiful villa that was the American writer Francis Marion Crawford, who chose to live in Sorrento since 1885, the year of his marriage. When the writer bought the villa, it was a simple farmhouse surrounded by a large garden. In the peace of the villa, the writer wrote many of the works that made him famous in the world and, over time, made some alterations to the original building, making it as beautiful as it appears today, shaped vaguely that we bring to mind the ancient castles Medieval; to this we must add the wonderful location, overlooking the sea, with a nice view of the Gulf of Naples, the imposing Vesuvius, and the islands of Ischia, Procida and Capri, that stand far away.

They were made by Crawford to prevent possible landslides on the coast and also facilitate the sighting of the building by the sea; for this reason, on the stones of the ramparts, the Crawford he carved the words “IN studded SECURITAS”. The interior of the villa was enriched with artistically carved wood paneling, a work of the craftsman Giovanni Sorrento Massa.

The garden changed its appearance

He was decorated with sculptures, works of the writer’s father, Thomas, and antiquities, of which Crawford was a passionate collector. In addition, he did make a tennis court surrounded by green citrus fruit, which was rich in the surrounding garden. Yachtsman, the Crawford used to move aboard his sailboat, which was enabled to command. He also build a path to the sea, to access the marina docking, shelter for its boats. In the history of Sant’Agnello, this villa has played an important role, because the point of reference and meeting the cultural environment of the time. This building is an important asset for everyone, a glimpse of the nineteenth century, in which the original atmosphere is still palpable, despite the passage of time. For his express wish, Crawford is buried in the cemetery of Sant’Agnello, in a tomb at the right of the driveway.

On the death of the writer, which occurred in 1909, the house passed to the eldest daughter, Eleanor, wife of the noble Pietro Rocca of Roccapadula, which gave two sons: Leo and Honorius, which he donated, in 1954, the Institute of Maria Ausiliatrice , which still welcomes, the many young people gather here to spend some time for recreation and prayer.

It has a tradition of hospitality and serenity . The climate helps to make it a privileged place of spiritual recharge , rest and relaxation , offering the chance to experience silence and contact with nature , long periods of prayer and encounter with the ” Word ” in the style of Salesian spirituality.

An educational site open to all young people, offers an experience rich in human and Christian values that comes in a range of educational offers adapted to different age groups and approach to life and is expressed in the multiplicity of the educational curricula, Since the interests of the Associations and the proposed cultural leisure ( POL Salesian Youth Cineclubs Youth Salesians, Salesian Youth Tourism ).

This site uses third-party cookies to provide a better experience and for improve our services. Continuing on this website you accept the use of cookies. Read more »Ok